“HERO6’s next-level image quality, video stabilization and three times faster QuikStories performance makes it a powerful storytelling extension of your smartphone,” said Nicholas Woodman, GoPro’s founder and CEO. “It’s never been easier to live it, and then share it… using a GoPro.”

With a rugged, waterproof, go-any where design, the Hero6 Black and the GoPro App automatically transform your adventures into cinematic QuikStory videos you can share with the world. Hero6 also has improved dynamic range and low-light performance.

The camera also features new Touch Zoom functionality. WiFi speed has been increased to 5GHz. The camera is waterproof up to 10m and is compatible with Karma and Existing GoPro Mounts. Other features are Raw and HDR Photo Modes along with Voice Control in 10 Languages.

Hero6 Black is now available on GoPro.com and at select retailers worldwide. It carries a price tag of ₹45,000 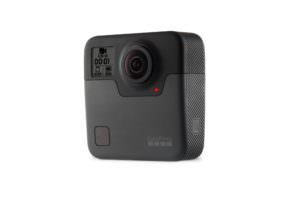 The Fusion captures immersive 5.2K spherical content so that you will never miss the shot. A gimbal-like stabilisation makes it all amazingly smooth. Use the GoPro App to play back and share your footage as VR content or use the app’s OverCapture feature to recapture and share your spherical shot as a traditional fixed perspective video.

The Fusion can capture 5.2K30 and 3K60 spherical video along with 18MP spherical photo. With the OverCapture feature, it allows for traditional video creation from a 360-degree footage. The camera is waterproof up to 5m. It provides option of Time Lapse Video + Photo, Night Lapse and Burst. The bundled Fusion Studio desktop software lets you edit the footage

GoPro Fusion is currently available for pre-order on GoPro.com for USA, Canada, United Kingdom and the European Union, shipping in November at an MRP of $699.99. The OverCapture mobile experience will be part of a new version of the GoPro App available for iOS and Android in early 2018.

GoPro also launched the Shorty pocket-able extension pole and tripod, The Handler, a floating handgrip with a quick-release mounting feature and Bite Mount + Floaty, a versatile bite mount with an easy-to-spot float, ideal for POV.

GoPro has released its latest update featuring QuikStories, a new GoPro feature that automatically pulls footage from a Hero5 camera and creates ready-to-share videos on your phone. QuikStories also allows you to add custom music, […]

Copyright © 2019 TrailingLights | All Rights Reserved. | No part of the content may be copied or reproduced without permission.